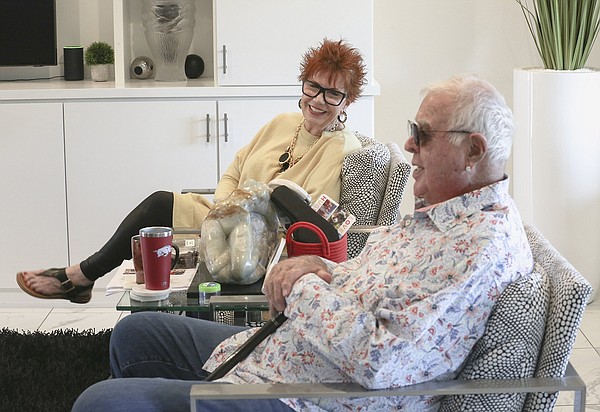 He sells his 6,000 square foot home in Fayetteville and moves in with his wife, Nancy, in a condo about half that size.

An online auction of more than 500 items from his home started last Sunday and will end today.

Browsing through some boxes, Blair came across a photo of his late wife, Diane, doing a New York Times crossword puzzle with Clinton.

Diane Blair was then hospitalized in their home in Fayetteville. She died of lung cancer in 2000.

Jim Blair said he would donate the photo, along with other newly discovered items, to the Special Collections at the University of Arkansas, Fayetteville, where Diane Blair’s papers are stored. She was a prominent professor of political science at the university.

“Everything people want to see, I’ve shredded,” said Jim Blair. “I can’t write a book until a lot of people die, and I’m afraid I’ll die first, so the book will probably never be finished. A lot of people breathed a sigh of relief about that, I Assumed.”

Blair, 86, is a well-known figure in Arkansas legal, business and political circles. He is probably best known as a former general counsel for Tyson Foods Inc. and as a close friend of Bill and Hillary Clinton.

Blair lived in the house on Tanglebriar Lane in Fayetteville for 46 years.

Raised by his grandparents in Fayetteville, Blair learned to read “by accident” at the age of 3. By the age of 19 he had graduated from college, and by 21 he had completed his law studies.

When he was 13, he said, a voice came through him as adults argued in a meeting at First Baptist Church.

“I’m sitting there on a Wednesday night listening to all of this, and God is telling me to come up and grab the mic and tell these people to stop it,” Blair said. “Do I think God talks to 13-year-old boys? I don’t think so. I think it must have been some kind of self-hypnosis. But I go up, I pick up the mic, I chew the congregation of the First Baptist Church of Fayetteville.”

Blair said the incident marked him as perhaps more religious than he actually was.

By the time he was 18, Blair was an ordained Baptist minister.

“On the question of segregation, the church in 1957 was not standing on what was clear to me – if you believe the Bible and you believe Christianity, you cannot be a segregationist,” Blair said, referring to the crisis at Little Rock Central High.

“At that point, I just had to leave the church,” he said.

While attending college in Fayetteville, Blair made milkshakes and malts at Jug Wheeler’s Drive-In on Dickson Street and was a janitor at the Baptist Student Union, he said in a 2008 interview with the David and Barbara Pryor Center in Fayetteville.

As a young lawyer at a Springdale firm, one of Blair’s main clients was Tyson Foods.

By 1980, he had become the company’s in-house counsel.

Blair said he was often involved in politics, but not as a candidate.

“I never wanted to hold a position,” he told the Pryor Center. “Well, I’m saying I never wanted to hold office. I mean, I fantasized when I was young that the greatest job in the world would be to be a United States Senator. Now, in getting older, I managed to be associated with so many U.S. senators, I decided it wasn’t a good job after all.”

Blair married Margaret Gibson in 1957, according to the Pryor Center interview. They divorced in 1974 and he married Diane Divers Kincaid in 1979. After Diane’s death in 2000, Blair married Nancy Beth Horton, a Marshall native, in 2005.

Blair has been a donor for many causes. In 2002, he announced a $3 million donation to the Fayetteville Public Library, which named its new building Blair Library after his late wife, grandmother and aunt, according to the Fayetteville website. the library.

Although there’s a lot in the auction, Blair said he’s given away a lot already. Much of his art went to the Museum of Native American History in Bentonville.

“Basically we’re just trying to clean it up” so he can sell it, Brockman said.

The auction is online at https://bit.ly/3k4nqUv.

Blair said work on the condo had been completed for almost three years. He and Nancy started spending two nights a week there, then three nights a week.

Three weeks ago, when he decided to get rid of the house, the Blairs started staying in the condo when they were in Fayetteville. They also have a part-time home in North Miami Beach, Florida.

Blair said he recently realized he accidentally visited 47 states. He will therefore make it his duty to visit others. He and Nancy recently returned from a trip to West Virginia. Now he only has to visit North Dakota and New Hampshire.

“I’ve been to 107 countries and I’ve been to 48 states, and I hear all these people on the internet giving all these global opinions on global affairs and national affairs that have never gone anywhere,” a- he declared. “You don’t really understand the world if you haven’t traveled the world. You don’t understand the United States if you haven’t traveled the United States.”

Blair said he won’t really miss the things that are being auctioned off. What pained him the most was having to repatriate Boston Blackie, the 110-pound labradoodle he’s had for nine years. But the new owner brought Boston Blackie a few times to visit the Blairs.

Nancy Blair said she and her husband discussed end-of-life wishes.

“He told me what he wanted on his tombstone,” she said. “I said, ‘That’s really good. That says a lot about you. I said, ‘You have to write it for me.’

“What I said I wanted there,” Jim Blair said, “is ‘I’m satisfied with my belief that I’ve done more good than bad. “”