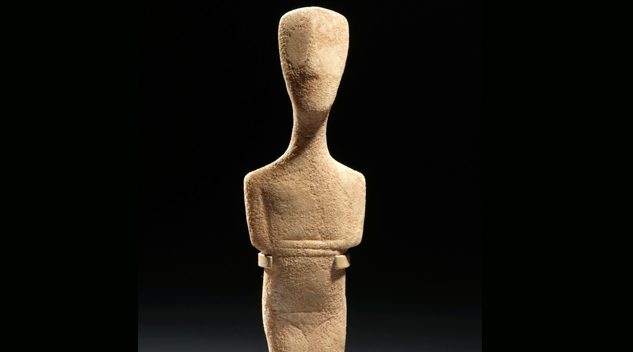 An elongated female figure finely carved in Cycladic marble circa 2500 BCE, of the Spedos type, 9Â¾ inches high, sold for $ 301,250. Having your arms crossed is typical of Cycladic sculpture in the mid-2000s BCE, its name is derived from an ancient Cycladic cemetery on the island of Naxos.

LOUISVILLE, COLO. – In an area where authenticity and provenance are of paramount importance, Artemis Gallery specializes in the sale of antiques, ancient art and ethnography.

Teresa Dodge, Executive Director and co-owner with Bob Dodge, Elaine Jamieson and Phil Keck, said, â€œOur niche is very specific, which is both good and bad. Good because we are known for our expertise in selling authentic and legally acquired items from ancient and ethnographic cultures (and have been since 1993), and this continues to bring us new collections to sell and new bidders to buy.

â€œBad, because the pool of potential buyers is shrinking faster than the collections that reach us. The truth is, new collectors are younger and not at all interested in “old stuff” like the previous generation. They may want to acquire certain genres, but the concept of “total collection” is gone. Additionally, the average collector of ancient art is a male, over the age of 60, and as they age / die their children usually don’t want anything to do with their collection. Good for us absolutely, but then finding the new collectors to sell to is the challenge. “

But Dodge added that what is â€œvery goodâ€ for Artemis is â€œthat the established high-end dealers see how we move the goods and join us and ask us to sell their inventory for them. They still sell through their retail store, but we deliver what they don’t have access to – the hundreds of thousands of potential bidders around the world that our auctions provide.

The Colorado company’s two-day auction, September 26 and October 3, was highlighted on day one by a Spedos-type Cycladic marble figurine that sold for $ 301,250. The elongated, intricately carved marble female figure of around 2500 BCE came with impeccable provenance: former private collection of Dr Best (Cycladic art collector) and Dr Banting, well-known physicians in Canada who discovered the insulin in the 1920s, acquired in 1972 from Sotheby’s London, “Egyptian, West Asian, Greek, Etruscan and Roman Antiquities”, December 4, 1972, lot 178. This auction featured items from the HJP Bomford collection, including this room.

A larger than life, finely carved and polished gray shale Buddha head from Central Asia, Pakistan and Afghanistan, carved during the Gandharan Empire, circa 200 CE, 15Â½ inches high, with hair wearing a large ushnisha, brought in $ 34,238.

The 9 inch tall sculpture with its arms crossed is typical of Cycladic sculpture in the mid-2000s BCE known as the Spedos variety, this name derived from an ancient Cycladic cemetery on the island of Naxos .

The second day of the auction, October 3, featured pre-Columbian art from Ancient Americas, Native Americans, Africans / Tribals, Oceanians, Spanish Colonials, and fossils. The best lot of the second day was a huge M-14 type M-14 figure of Guerrero Mezcala (over 16Â½ inches tall) which made $ 31,125. The abstract anthropomorphic figure from around 300 to 100 BCE is hand carved from a dark green stone with beige and gray inclusions.

The exceptional two-day auction surpassed any other auction in Artemis history by over $ 100,000, Dodge confirmed, â€œso it could definitely be called a success. Instead of cramming it all into one auction, one day dividing things up and spacing out sales by a week had a very positive effect on bidders’ registration and the final auction. Post-auction sales have so far contributed an additional 15% of total sales. “

Artemis Gallery conducts all of its auctions online only and has been doing so since 2010. â€œOur telephone bidders now represent almost 20% of our auctions, coming from all over the world.

Teresa Dodge said Antiques and Arts Weekly that it is Bob Dodge, founder and executive director of the Artemis gallery who is the recognized expert in the field of ancient art. She said, â€œBob can tell what’s real and what is fake in the blink of an eye. He’s the real expert on all things old, and he’s the only reason our reputation for what we sell is among the best in our industry. He started the part-time Artemis Gallery almost 30 years ago because of his love of art.

Bob also appears on the hit History Channel show, Pawn stars, like their expert in ancient art. He has appeared in over 13 episodes, with over ten episodes in the works.

Leading the second day was a large green stone M-14 type figurine of Guerrero Mezcala (16Â½ inches), which made $ 31,125. The abstract anthropomorphic figure from around 300 to 100 BCE is hand carved from a dark green stone with beige and gray inclusions.

Other highlights of the first day included a larger-than-life, 15Â½-inch, finely carved and polished Gandharan gray shale Buddha head, $ 34,238, circa 200 CE, which projected peace and harmony.

A beautiful and richly decorated jue from around 1045 to 771 BCE, a bronze ritual wine vase, brought in $ 31,125. With a brilliant turquoise patina and some areas of pale silver color due to the relatively high percentage of lead in the bronze alloy, the Shang Dynasty Chinese jue, 10Â¾ inches high, closely resembles that of the Metropolitan Museum of Art sold. at Christie’s for $ 32,500.

A large Roman stone mosaic of a royal couple with initials below the portraits sold for $ 31,250. Around the 3rd to 4th century AD, the large mosaic, made up of thousands of square stone tesserae, showed a symbol between the heads that closely resembles a heart, making it both ancient and romantic.

Another portrait, this rare portrait of a mummy on linen, $ 19,920 Egypt in Roman times, circa 2nd to 3rd century CE, is stylistically and iconographically similar to the portraits of Fayum. It depicts a beautiful, young and wealthy woman wearing a refined long-sleeved dress in breathtaking pastel pink hues with light blue and dark blue trims, and richly adorned with a two-row necklace and ring. in gold placed on his right ring finger.

Another Egyptian piece, a painted wood and gesso sarcophagus panel, sold after the auction closed for $ 23,655. A Roman Republic period marble head of a stern-looking elderly man was also sold for the same amount.

With a shiny turquoise patina and some areas of pale silver color due to the relatively high percentage of lead in the bronze alloy, circa 1045-771 BCE, the Chinese Shang jue dynasty, a bronze ritual wine vase, brought in $ 31,125.

A Panamanian gold double bird pendant, 166 grams, 5 by 4Â¾ inches, went up to $ 18,675. The pre-Columbian pendant, Veraguas, dating from the first to the fifth century CE, had not one, but two Siamese birds, made from 14K to 18K gold.

An extremely rare pottery vessel in the form of a dancing dog, Pre-Columbian, Western Mexico, Colima, circa 100 BCE to 250 AD, fetched $ 13,965. The dog stands over 9Â¾ inches on tapered hind legs with a round abdomen, a pair of raised front legs, a stocky neck and a thick tail with a curved tip on the reverse side for balance.

On October 3, the best lots were completed with items from different categories: a Moroccan fossilized Mosasaur skull from the late Cretaceous sold for $ 13,965. The 39-inch skull, about 101 to 66 million years old, was from a private collection in Ohio; a 1900s Mexican Colt revolver that belonged to General Pasqual Orozco, made $ 11,205 and a prehistoric Native American bowl, Southwestern United States, Mimbres Valley, NM, with fish decoration, circa 950-1150 CE, which sold for $ 11,199.

Theresa Dodge concluded that it is â€œBob’s eye, his knowledge, his thirst to be the best in the business, that is the ‘secret sauce’ to our success. She continued, “OK, so do I (I’m in charge of sales and marketing), our business partner and friend, Elaine Jamieson (CFO), and Phil Keck, our VP of operations, and our wonderful staff. 15 who love what we sell as much as we do.

All prices include buyer’s premium as reported by the auction gallery. For more information, 720-890-7700 or www.artemisgallery.com.