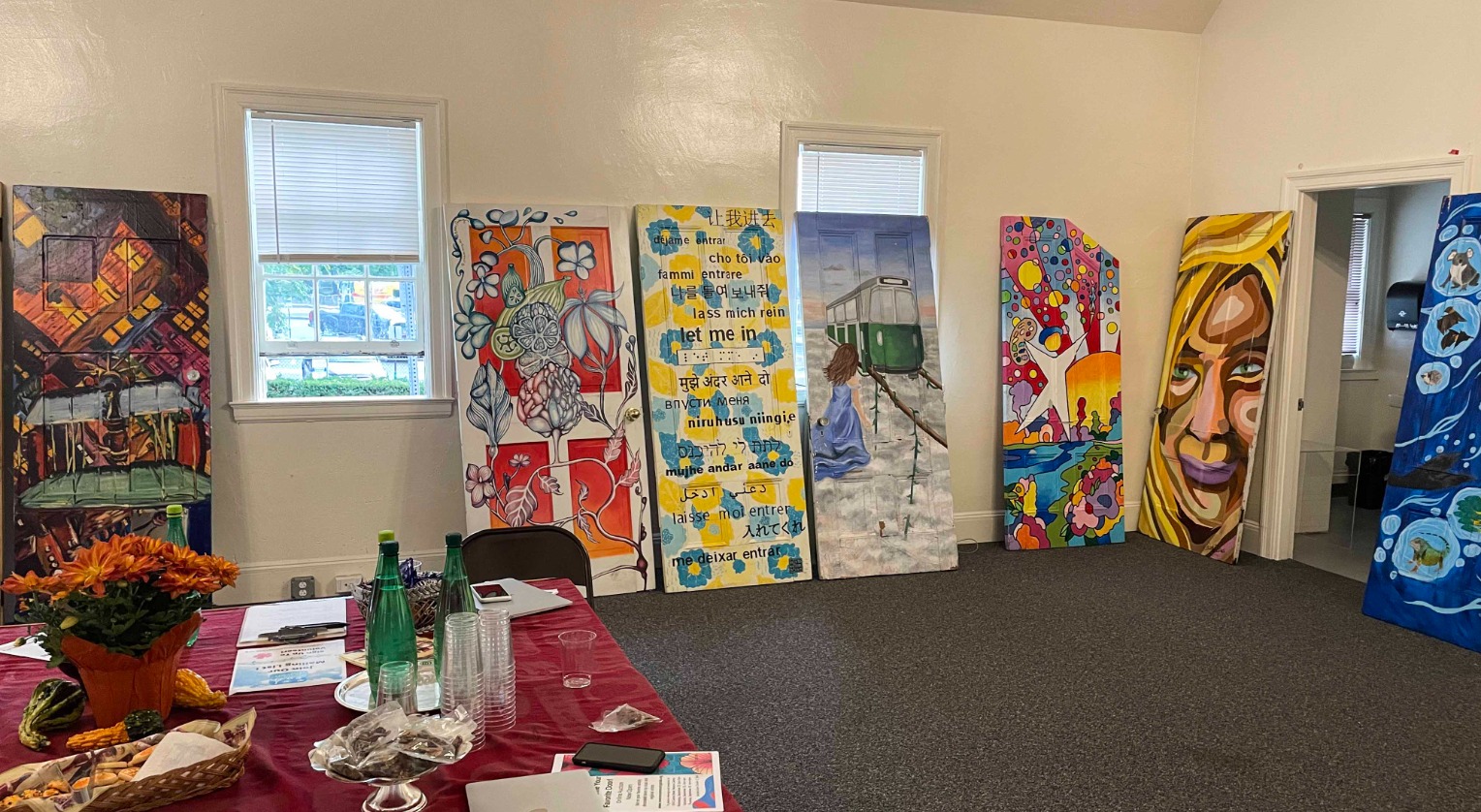 Twenty-five brightly painted doors were displayed in the village centers during the summer months. Participating artists were selected through a competitive process by the Newton Out Doors selection committee.

The artist selection process was competitive with 100 applicants in total, said Gloria Gavris, NCP board chair. The proposal itself consisted of a drawing project for the 30 x 80 inch doors. After selection, NCP paid the selected artists for their work.

“We have split all the artwork with three or four in each village center to create more pedestrian activities and add more color and creativity to our local centers,” said Gavris. “They stayed up from May to September and now we’ve got them all together for the public art auction.”

NCP conducted three public tours of the doors, allowing potential bidders to view the doors in person. The last public screening was on Thursday at 1294 Center Street, Newton Center from 4 p.m. to 6 p.m. Photos and descriptions of the doors are also available. in line. Online auctions for closed doors on Friday at 7 p.m.

“There are many creative ways to use them now that they are no longer in the world,” said Dinny Starr, vice president of NCP. “They might go back outside to your yard or some people have talked about using them as a headboard or table top.”

Twenty-five doors were donated for the project, 20 from an owner undergoing renovations and five from the Nathaniel Allen House who recently completed an eight-year restoration project by the Newton Cultural Alliance.

Of the 25 original doors on display, four doors were not available at the auction.

“Some of the artists depicted here are accomplished professional muralists,” Starr said. “They knew what they were doing, installed the artwork and made sure it was protected from the elements.”

Starr specifically mentioned Tuttle, a renowned Massachusetts muralist who recently completed the “Fear” mural in East Boston as part of the Sea Walls Boston Mural Festival. Tuttle’s gate, “Inside and Outside the Virus,” expressed an “inside” way of life with the inside gate and nature, which was used as an escape route throughout the pandemic, with the exterior door, depending on auction site.

Along with Tuttle, local artist couple Gray and Leslie Held painted the “Let Me In” doors, which features an original poem and the phrase “let me in” in several different languages. Newton North High School student Shihui Angela Zou painted her doors in appreciation of Chinese culture and history. The doors feature beautiful cherry blossoms and the stringed instrument, the erhu.

“One of the things that was really important to us in the project was to bring art to where people were,” said Gavris. “After COVID, dreary winter and spring, I believe more than ever that the arts are important to bring to the community.”