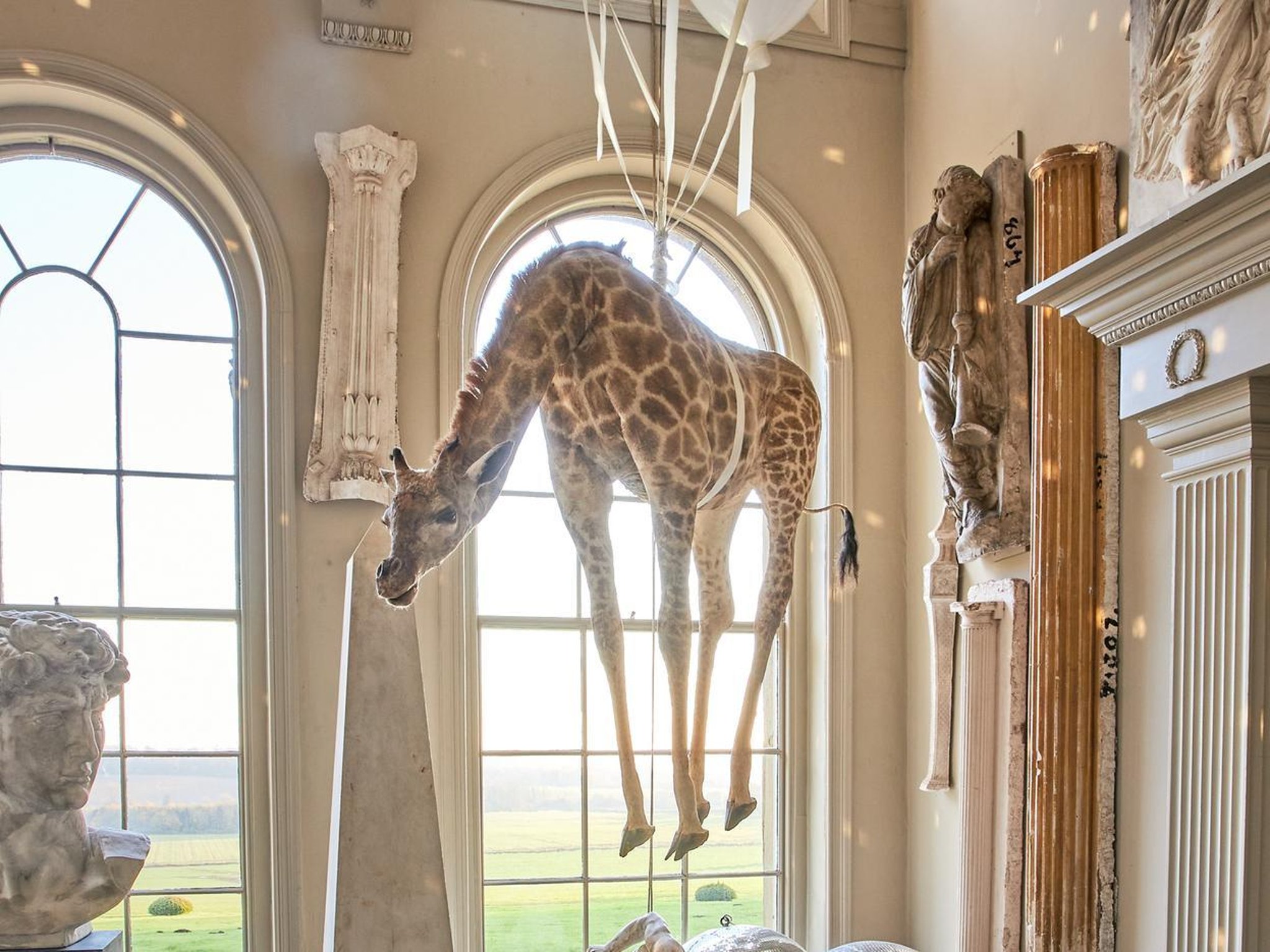 Flying giraffe, triceratops, yellow billiards? These Banburyshire country house auction items could be yours for virtual sale from tomorrow

Content from the spectacular Aynhoe Park is being auctioned through Dreweatts in an online sale from tomorrow through Friday.

The sale offers an incredible opportunity to own a true piece of English history, as the contents of the 17th century Palladian country house, Aynhoe Park, are offered by Dreweatts at the three-day auction titled Aynhoe Park: The Celebration of a Modern Grand Visit.

The famous family home of James and Sophie Perkins, which recently won the world’s “Best Venue” award and hosted celebrities from music, film and fashion, is expected to spark worldwide interest. Dubbed one of the ‘most hedonistic party wonders’, the house has amazed guests including Kate Moss, Noel Gallagher, Bono and the Rolling Stones, though in the past Charles 1 and Winston Churchill are said to have stayed at Aynhoe .

Aynhoe Park Estate has been the project of businessman and entrepreneur James Perkins and his wife Sophie for 15 years. Their passion for restoration and collecting is evident in its carefully preserved rooms. Over the past two decades, James has been responsible for large-scale restorations to prestigious historic buildings across the country. Several of his projects, including Aynhoe Park, have been recognized for their innovation, sensitivity and architectural ambition.

As you walk through the house, you are transported around the world via works of art, books, sculptures, furniture, taxidermy, modern design, and curiosities such as a triceratops skull and trunk. Orient Express. Interiors contain a mix of eras, styles, and textures, which are simply stunning as you walk through what looks like a museum intersected with a fantasy world.

Notable works in the large rooms of magnificent proportions are a collection of classic ‘Grand Tour’ plaster sculptures, a fascination that James has had since childhood, having brought his first piece as a child with his pocket money – a new cast Apollo bust. This has spawned a collection of casts spanning over 25 years and is the largest collection known to be in private hands – many of these will be offered for sale.

Commenting on the upcoming auction, Joe Robinson, Head of Sales, said: â€œThis is a truly distinctive collection, unapologetic for its eclecticism and range and emblematic of the enthusiasm of a lifetime for it. architecture, the intriguing and the eccentric.

An astonishing and colorful chandelier

Describing the sale and the James collection, Will Richards, vice president of Dreweatts, said: â€œAynhoe Park is truly an Aladdin cave of beautifully chosen works, from the academic to the eclectic and the old to the contemporary. Rightly titled The Celebration of a Modern Grand Tour, it is the fulfillment of a lifelong passion and a contemporary interpretation of a tradition that would have originally been reserved for the upper echelons of society. “

Among the highlights of the sale are conceptual works created by James Perkins, a highly regarded designer and artist in his own right. Among his creations is the original painting The Aynhoe Moon influenced by the clear nights of Aynho, the famous “flying giraffe” of the Orangery of Aynhoe Park and the giant bird’s nest with the golden egg. James’ designs are at the heart of the Aynhoe Park brand and have become collector’s items in their own right.

When purchasing the property in 2006, James set out to combine 21st century living with architectural integrity, a responsibility he saw as important to the home’s legacy. The restoration is now complete. Aynhoe Park was renovated by prominent Baroque architect Thomas Archer (1668-1743) who created adjacent wings to form the spectacular forecourt of the north facade.

However, the interiors of Aynhoe Park were designed around 1800 by Sir John Soane (1753-1837), for William Ralph Cartwright (1771-1847). Soane added large arch screens, connecting the house to Thomas Archer’s newly created wings. The estate was to remain in the Cartwright family for many years.

Distinctive comfort from the James and Sophie Perkins collection

James Perkins said: â€œAynhoe Park is reminiscent of the modern Grand Tour, hence the title of the auction. It is furnished with a collection of iconic objects and curiosities from our travels around the world. It has been my passion, as well as a family home. We have loved carrying on the tradition of Aynhoe Park by sharing and hosting our home with the most respected people in business, film, fashion, art and music.

“The sale is a celebration and a culmination of memories, before moving on to other projects, namely the restoration of Parnham Park in Dorset”.

To see a virtual tour of Aynhoe Park and its artifacts, click here. All photos are copyrighted by Dreweatts.

More eye-catching artifacts in the Aynhoe Park catalog
James Perkins’ Aynhoe Moon, also up for auction
Who will buy the famous flying giraffe in its setting in the Aynhoe Park orangery?
A head of triceratops – part of the Grand Tour online auction taking place in Aynhoe Park this week
James and Sophie Perkins embarking on a new restoration project
Aynhoe Park – a Grade I Palladian country house near Banbury

6 online auction sites like eBay, from GovDeals to Municibid

$ 40 million in goods sold on the Gold Coast