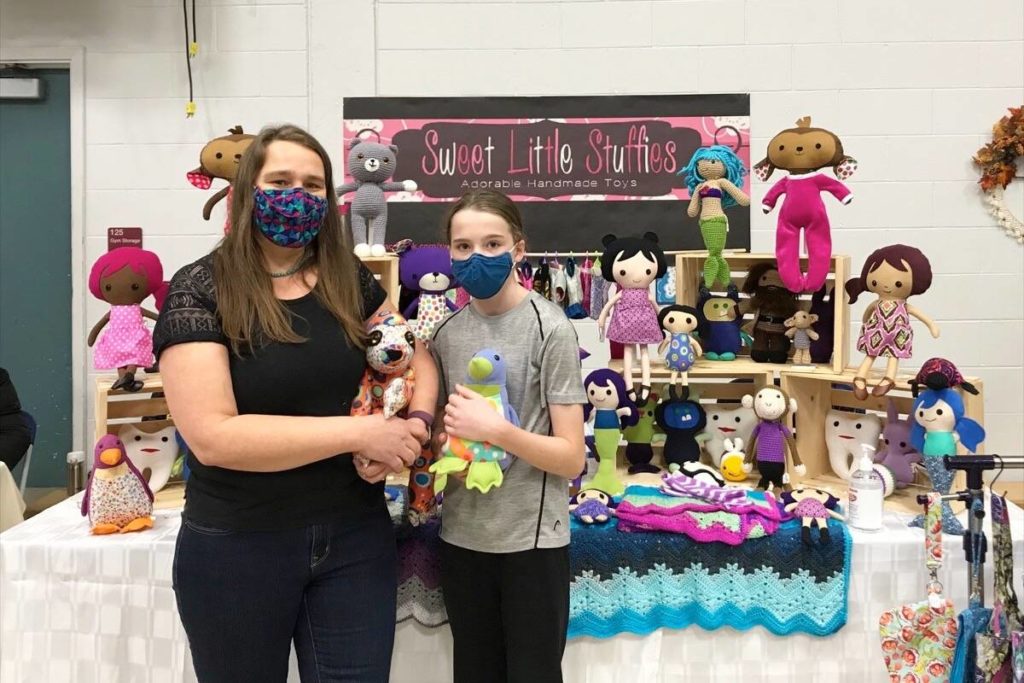 A group of more than 50 local artisans and craftspeople will auction their products next week to help victims of recent devastating floods in British Columbia.

Online from 6 p.m. Thursday, December 9 to 8 p.m. Saturday, December 11, members of the North Delta Artisan & Gift Market will be hosting a silent auction with all proceeds going to the Canadian Red Cross.

“We were going to have a first anniversary event with prizes and stuff – our first anniversary was November 21 – and just before that happened the flooding hit. And so we pivoted and decided to have an auction instead, ”said Sharon Poetker, one of the group’s founders. Journalist.

“I just thought I would have some [auction items] because during the year everyone donated for prizes, raffles and stuff. (…) But I broadcast it and I said: “Does anyone want to make a donation? And almost the whole group – it chokes me – almost the whole group donated. It’s the kind of band it is and it’s really touching.

As of Wednesday morning (December 1), 66 items made by local artists and artisans had been donated for fundraising, with everything from jewelry to crafts, dolls, Christmas decorations, artwork, photographs, pottery and much more to gain from 32auctions.com/NDartauction2021.

The auction fundraiser is the latest project for the group, which just a few weeks ago hosted their first in-person event – a holiday craft market at Sunshine Hills Elementary. The Nov. 13 event drew over 700 people who viewed products from 31 vendors, and donation-based admission raised $ 2,000, which was split evenly between the school and the Rotary Club of North Delta.

The North Delta Artisan & Gift Market group met last November to allow local artisans and artists to sell their works after COVID restrictions ended their usual outlets such as craft and holiday markets .

“Last year with COVID everything was closed, there were no markets and there were very few organizations online – marketplaces or anything like that,” said Heather Ratcliff, a toy maker. and dolls from Sunshine Hills. “I was talking to Sharon about how frustrating it was. I had all of these things on hand and in stock. She’s great at marketing, and she put together a bunch of artisans and we made our little group. “

Poetker first created a group on Facebook where members could sell their products, followed by a website, ndartmarket.ca.

“I kind of did it and it got really busy, really fast,” Poetker added.

Local artist Haike Tremblay, who joined the group in those early days and designed the market logo, said the loss of all the usual places and events where people like her sold their work sparked interest in the market. group.

“Most of the people who signed up were people who mainly sold in markets and outside of their own homes and things like that. It was kind of like everything stopped, so it was the opportunity to be able to advertise on the Facebook group and show everything you have on the website that Sharon has created to go along with it ” , Tremblay said.

“Most of our neighborhood [Facebook] groups, you can only advertise maybe once a week or something, when it was a Facebook group exclusively for artisans and sellers saying, “We have things what you want, then this is where you have to come to find these things ”.

In the year since the establishment of the North Delta Artisan & Gift Market, membership grew to 48 local vendors plus nine “guest vendors” from outside the region, and the community response in its whole has been overwhelmingly positive.

“It’s a nice little community that grew out of this,” Ratcliff said, referring to both the sellers and their customers.

“With this group, and with this [Nov. 13] craft fair, you can tell people – not just artisans – the markets were really lacking. “

“Earlier in the year, I had asked if anyone wanted to give a [review], and people sent all kinds of notes. I included them on the website, people in the community who wrote in and said, “I have this stuff and it was awesome” and “I’m really glad we have a place to buy things. “. We’ve had a lot of them, ”said Poetker.

“And even at the craft fair we had just a few weeks ago, a lot of people said they came because they’ve been following the group for a year. And so that was pretty cool.

One of the key things Poetker highlighted was the collaborative nature of the group, with many members contributing ideas and suggestions for improving things. The sellers even have a private, separate Facebook group that they use to help each other out, making the marketplace a kind of community-building effort as well.

“We can communicate with each other in the background and give each other advice and ideas – you know, ‘How did you do that? “Or” Where did you find this? “- or, you know, if we’re looking for suggestions on how to do something or market something or whatever… which is really helpful,” Tremblay said.

There’s even a social aspect, with members meeting at Poetker’s last summer – many for the first time.

“We all got together and we all brought samples of our art and got to meet in person after being online for so long,” Ratcliff said.

“We all hung out and talked, were able to put faces with names,” added Tremblay. “It was an opportunity to come together and see who is behind the products that we have reviewed, discussed and promoted,” added Tremblay.

But of course, the market’s most important role is, as Ratcliff said, to “support local artisans, not Amazon”, especially with the holidays just around the corner.

“This is a great opportunity for Delta and the surrounding communities to focus on buying local as well, especially this year with shipping issues and just getting products into stores. It’s a local way of shopping, ”said Tremblay.

As of yet, the group has no plans for other in-person events, but is leaving the door open to the possibility in the spring.

“I think I’m learning to never say no,” Poetker said of hosting another market. “I don’t know where this is leading. Like, I was just thinking, oh, that’ll get us through COVID and then I’ll move on. But COVID is a bit languishing. So I don’t know where it will go, but I’m here for the ride.