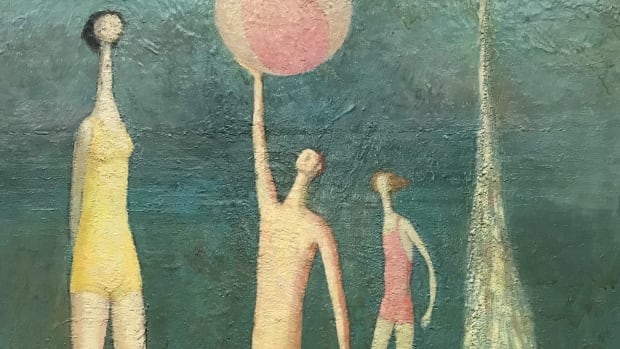 An online auction has set a new record for an oil painting by famed Saint John artist Miller Gore Brittain.

When the one-week auction ended on Sunday evening, Numbers on the beach sold for $330,000.

For the past two years, the two have worked with the estate of Miller Brittain’s daughter, Jennifer, who owned a large collection of her father’s work. Miller Brittain died in 1968.

Isaac said that many parts, including Numbers on the beachhad been stored for many years.

“And it’s a beautiful painting,” she said. “It’s so nice. It’s silhouettes on a beach and it’s a mother and a child and a beach ball. It’s beautiful.”

Isaac said they have been trying to offer a variety of Brittain’s works in a series of online auctions over the past two years.

“It just seemed like the right time for this one,” she said.

The sale attracted active bidders from across Canada

“There was definitely some bidding from Saint Johners,” Isaac said, but “ultimately” the bidding war was between two out-of-town bidders.

By the time the virtual hammer signaled the end of the auction, the final price was $330,000. Add to that a 10% “buyer’s premium” and the total paid was $363,000, which Isaac says is a Canadian record for a Miller Brittain oil painting.

Isaac and Brideau have been very careful not to reveal anything about the buyer, saying only that the person is Canadian and that the purchase is not their first Miller Brittain.

“Collectors are extremely private when it comes to – especially a painting of this value,” Brideau said.

When asked if the painting would remain in New Brunswick, Isaac replied, “It is very possible that the painting will remain local, yes.”

The director and CEO of the Beaverbrook Art Gallery in Fredericton says it doesn’t matter Numbers on the beach remains local.

“Here is an artist who should be seen across the world,” said Tom Smart, who has written a book on Miller Brittain.

Smart said Brittain is one of the greatest painters in Canadian art history.

“He’s definitely the most expressive artist from those parts of the world… And he’s just an artist of so many different dimensions and so many talents that I’m very, very happy to see his legacy being recognized in this way. way.”

Value of other work likely to increase

Brideau said Numbers on the beach is a well-documented painting, having featured in two books on Miller Brittain, including Smart’s Miller Brittain: When the stars threw their spears.

“And it’s been on some shows, so there was a lot of interest and a lot of story,” Brideau said. “So, you know, it’s very important like that.”

Isaac said the record price is an indication that Brittain is finally getting its due.

“It proves that Miller Britain was a very talented artist who deserves this recognition. It may have taken a while to get to this point, but he is a phenomenal Canadian artist,” she said.

“And hopefully it will continue to give that awareness of Miller Britain’s talent and the respect he deserved as an artist.”

Isaac said the value of Brittain’s work has increased since she began working with her daughter’s estate.

“We increased the value of every auction we made,” Isaac said.

She said the increases bode well for people who have Miller Brittain works in their collections.

“But yes, other paintings will come up and depending on…subject and condition, this should help increase the value [of other Miller Brittain work]”Isaac said.

The National Gallery of Canada describes Miller Brittan as “an exceptional draughtsman, painter, watercolourist and muralist.”

“He was one of the few Canadian artists to create social satire in the 1930s; his crowded scenes of everyday life reflect a sympathy for humanity and an ability to express character through gesture.”