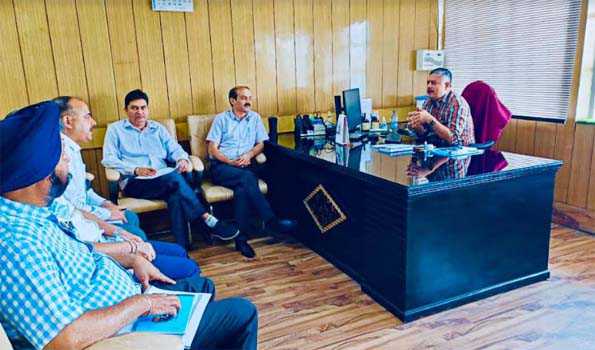 Organize a global auction for the famous sale of Kishtwar sapphires: Secy Mining

Jammu, May 31 (UNI) Jammu and Kashmir Mining Department Secretary Amit Sharma on Tuesday pleaded for a global auction for the sale of sapphires.

Sharma was attending an initial review meeting on the operation of J&K Minerals Corporation here at the Civil Secretariat.

He ordered that all steps be taken immediately to organize a great worldwide auction event for the sale of sapphire so that this rare gem discovered on the hills of J&K can get the best sale product.

It was informed at the meeting that J&K Minerals Corporation actively mines the valuable sapphire from Padder in the Kishtwar hills during the working season which spans 3-4 months during summers every year.

During the meeting, Sharma observed that J&K Minerals has been doing a consistent good job over the past few years, especially in extracting coal from the Kalakote mines and gypsum from the Parlanka mines, which translates to nice income for the company and helps eliminate many pending contributions for the employees of the Company.

The managing director of J&K Minerals has requested the allocation of some additional minor mineral blocks by the government as per the latest decision of the board meeting, which may help adjust the workers at the Kalakote coal mine in these blocks, as the mining work has greatly reduced in the coal mines due to the lot. of coal mining which has taken place continuously over the past few years.

He assured that the government would support all positive steps taken to take this oldest J&K company to new heights.